Afternoon of a Foehn Version 1

What is the life expectancy of a plastic bag ?  From crude oil polyethylene to the moment it is thrown away? For how long is it actually in use ?

Not long at all, compared to the length of time it will then stray across the planet, blown and buffeted by the wind.

This is where its real life begins ; its autonomous life. Little anonymous plastic bag amongst the world’s countless little plastic bags, on its way to a rot-proof eternity.

Let’s hope there’s a strong wind to help it overcome any obstacles, to carry it across oceans and mountains, to encounter new possibilities and to try out different lives.

What if we humans, so firmly anchored to the ground, what if we too could escape the pull of gravity and fly with the wind, free at last, carried along by the arbitrary waltz of the air ?

What if we were unconsciously feeding our thirst for the discovery of unknown territories, of fighting uncertain battles to make each one of our members part of us, autonomous and uncontrollable.

Upright or upside down, free up those hands, be the object of all motion and movement. Just a sound and the air’s caress.

This performance piece uses a simple turbine in order to create a vortex. The little plastic bag characters evolve in the air space, responding to the movement of the air which is in turn controlled by the protagonist.

This performance piece was originally commissioned by the Natural History Museum of Nantes for the 2008 science fair, « Fête des Sciences ». The theme that year was « movement » and one of the criteria was that this piece had to be presented within the walls of the museum, a space which rarely houses live performances.

Sitting alone in the museum for nights on end, Phia Ménard became fascinated by the Evolution of Species gallery. She was struck by the silence and stillness of all those wild animals assembled in the same space. Aware of how it would be impossible in reality to be in the presence of all those living animals, she decided to work on the notion of human beings as creators, and also as destroyers.

As part of her artistic project « I.C.E. » (« Injonglabilité Complémentaire des Elements » – « Complementary Unjugglability of the Elements ») she began experimenting with air and wind. She had the idea of using ventilators to blow air onto the stuffed animals, fanning their fur, as if breathing life back into them.

The next step was the addition of an everyday object ; an object void of humanity and also a major source of pollution when not recycled properly : a plastic bag. Transforming a simple plastic bag into a charming, graceful little character affirms the intervention of humans. A human being creates the puppet and then also takes its life away.

The object, manipulated by the flow of air, swirls and twirls, dancing to Claude Debussy’s most famous work, the timeless « Afternoon of a Faun », itself inspired by Mallarmé’s poem of the same name.

In this project, the « foehn » refers to the notorious transalpine winds which, according to a study by the University of Munich (Ludwig-Maximilians – Universität München), can lead to a rise in murders and suicides.

Warm thanks to Pierre OREFICE, to the teachers and pupils of Gaston Serpette School in Nantes (the nursery classes and the youngest class in the primary section 2008/2009), to Pierre WATELET and Mathilde CARTON from the Natural History Museum of Nantes and to Pascal LEROUX from Collectif la Valise in Nantes.

A performance without words, featuring the manipulation of objects and elements.

This project is linked to « Afternoon of a Foehn » and « VORTEX », two performance pieces due to be premiered on the 10th of October 2011 at the National Dramatic Centre of Caen (La Comédie de Caen) and which will then tour throughout France during the 2011-2012 season. « Afternoon of a Foehn Version 1 » is designed to be presented alongside these two projects when they are performed in a given « département» (county) of France ; for example, in the context of a small-scale local tour in little venues which don’t have the technical conditions necessary for the two bigger shows. 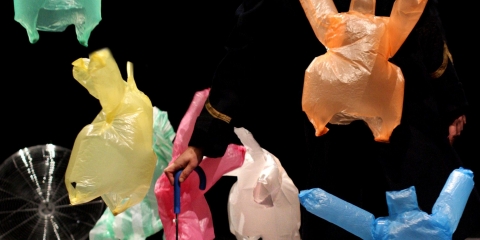