Kassel/Athens/Paris. A triangle. A tripod. Moving backwards and forwards, there and back, beween the surface and the depths.

Erecting buildings with no foundations, listening to the ruins, summoning the gods and goddesses, preparing ourselves for oracles and fighting against their revelations, breaking through the marble’s glossy lustre, regurgitating the fascist brown plague, what do I know ?

Kassel/Athènes. These cities are not my cities. I have no grasp of either of their languages.

And yet I do not feel like a foreigner, just a passenger. On the scale of an individual I am a comfortable migrant, a sort of middle-class, bohemian French woman. Nothing, except for my birth certificate, betrays my migration. I am one of the few who has allowed myself to surrender the full powers bestowed to me, in order to live freely. I have taken on the role of the weak, yet I inherited the chromosomes of kings. I have chosen to take on the stubborn role of « the opiniated one », to try and make others understand the necessity of seeing the body as malleable matter. I migrate from one status to another, requesting that my sentence be reduced… In this new life, I move forward every day, balancing on emerging stepping stones, swaying from one step to the next, without knowing whether my stepping-stones will give way and betray me !

Learning is less conflictual than unlearning, of this I am sure. During an endless adolescence, I was forced to tailor my behaviour, my actions and my attitude, to conform with my appearance. The woman I kept secretly hidden away eventually turned me into an adult. Learning to be one’s sex is easy, it’s just a method of fitting people in, or a way of knowing how to fit in. I broke the chain, I pushed the boat away from the riverbank, to drift free. I like soft floors because when in contact with them, it’s not the body fitting the form of the floor, but the floor fitting the shape of the body. And yet I am attracted to mineral substances. They scratch my skin and spill my blood. I am full of blood, full of anger contained beneath my skin. Blood does not have borders, or at least, not the same borders. My country is B+. You can’t read this in my face. Only the B+ people know they come from the same place. At Kassel/Athens/Paris, the B+ people don’t know each other, they don’t speak the same language, but at least they know they are important to each other. On this level, identity is an irrefutable piece of machinery which never lies.

What makes me write ? … The misery pouring out of dispossessed populations. The sadness of bodies in contradiction with themselves, caught between their desire for individual freedom and society’s approval and affirmation. I am searching for the smell which identifies them. I immerse myself in the flock’s sweat as they struggle to stay alive, whilst the executioners tighten the enclosure of power they hold in their hands. Like you, I inherited Europe’s history of conflict. The blood is now hazy vapour, but like a volcano which builds up its magma reserves, a well is filling up, silently. A new era of chaos is in preparation, or maybe it just never stopped growing… 1971, 1986, 1989, 2001, 2015. Birth, Tchernobyl, the Fall of the Wall, the Patriot Act, the end of democratic choice in Greece.

My train of thought is a jungle which I am trying to tame and reclaim.

Here I propose a piece of performance art, which could then be followed by a sequel ; the initial project is composed of three performances, of which this is the first. Although the provisional title is « Contes immoraux » or « Immoral Tales », there won’t be a moral, and there definitely won’t be any didacticism. The questions raised by documenta 14 in this year’s proposition : « Learn from Athens », and « Parliament of Bodies », clash in their reflections on identity, the body and matter, the groundwork of my research. Trying to imagine a form for these two places, Kassel and Athens, is the intellectual equivalent of doing the splits. In order to nourish the basis of my work I have chosen not to immerse myself in the two cities, as this would require a long stretch of time which I simply don’t have. Instead, my creation process will be focused on reading, research, dialogue and diving into matter, using empirical methods of exploration. I will be viewing the subject matter through a prism of components which oscillate between political gestures, body affirmation and the contradiction of elements.  Here are some details and a brief outline of my project …

I will perform in-situ, with the Non Nova team working around me to implement the performance. The research and the construction will take place in our workshop in Nantes. All the materials, objects and technical elements of the set will de transported from Nantes to the performance venues.

The performance will be played several times over a number of days to allow a large number of audience members to see it.

So that the Allied troops fighting against the Axis partners could engage their troops on European soil, they employed the defence strategy of carpet bombing. This strategy, used on both sides, turned out to be an unprecedented human tragedy for all of Western Europe. Entire cities were wiped out, burying their inhabitants beneath the rubble. My maternal grandfather was one of these victims when Nantes was carpet bombed by the Allies in 1943. During my childhood, the image and consequences of bombs did not seem real to me ; bombs were just the stuff of fantasy, as they were for many children. It was much later in my life, when I realised we were not going to lay flowers at the grave of my grandfather but were instead going to visit a faceless mass grave, that I understood the terrible infamy of bombs. Maybe it was at that moment my mind stumbled across the words « Marshall Plan », the program set up to rebuild Europe : organise mass destruction and then manage the reconstruction of war-devastated cities, following the model of a re-fabricated house and a rewritten urban development plan.

Build a « Marshall » village out of made-to-measure cardboard, the same way we put up a series of tents for refugees. Just here, beneath a seemingly unthreatening cloud.

A simple, repetitive gesture, like a robot. Spead out, trace, cut, assemble, put in place, then start all over again. Everything seems perfect, except for that cloud, which looks like it’s getting bigger, thicker and darker. Maybe a bolt of lightening, a gentle breeze, then eventually a series of heavy raindrops, a shower, maybe even a rainstorm with torrents of water ! The Marshall village collapses, despite the energy used up trying to save it. It turns into mush, a sticky mess in which bodies drown…

Techniques: cardboard construction / installation of perforated water pipe apparatus at the summit / the creation of a cloudy mass.

The project “Mother House” has received a special support from the Institut Français and the City of Nantes. 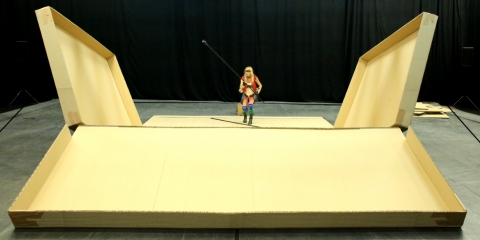