The Non Nova team is a heterogeneous entity made up of people of different ages, backgrounds and sexes, all united in a passionate desire to make the audience experience moments they didn’t expect.

I write out of necessity. I need to share my view of the complexity of our lives. I have chosen a multidisciplinary form of theatre to express myself because this best serves my vision of our societie’s hybridisation.

The creation of « P.P.P » is the beginning of a new direction, fuelled by the desire to go deeper into the subject of transformation as an axis of reflection, using physical matter and the elements. The desire to question the audience on their own transformation through their perception and understanding of the elements is also a driving force in my work.

This new direction has taken on the name « I.C.E. », which stands for « Injonglabilité Complémentaire des Elements » (Complementary Unjugglability of the Elements). « I.C.E. » is an artistic project which uses research to explore our relationship with the elements ice, water, vapour, air. The basis of the project is the possibility of apprehending a certain collective imagination of transformation, using something which is not actually manipulable, or at least, is not considered to be so.

This direction is marked by the choice to fully assume my artistic hybridisation. Therefore, the proposals will not be limited to the creation of live shows but will open up opportunities to work on art installations, fixed and ephemeral (depending on the chosen matter), on texts and also on films about our transformations …

I don’t follow any particular rules, I am an artist who observes the world with a desire to participate. To do this I try to understand who we are. Juggling and performance art are filters which allow me to distill what I see. I am convinced that we need to get away from the complacency of virtuosity, behind which it is so easy to hide.

Personally, I don’t think that artists are here to change the world. But they can direct the spectator’s gaze onto a certain detail of the world. When creating art, Utopia is vital to me, I can affirm that now. I have chosen which side I’m on. I prefer to fight for art, for all forms of art, against the business culture which views a work of art as a convenience good. I don’t like things to be formatted. I prefer art which involves thought, reflection, convictions ; art which defends the singularity and uniqueness of each individual and his, or her, actions.

This is why I am inviting the audience to become involved in battles which they know in advance will be lost, rather than just watching them.

I want to tackle the subject in a radical manner and avoid any sort of didacticism in order to ensure the spectators’ freedom of imagination. I’m confronting myself with limits, physical and emotional, waiting and hoping for a reaction.

Air, present at each and every instant of our lives, spreading itself everywhere, penetrating our pores, working its way through the depths of our bodies, transporting vital oxygen to our cells : air, an element stretching from the earth’s surface right out to the limits of cosmic space. Always in movement, we live in it without ever really paying it much attention, aside from checking its variation in temperature and its atmospheric movements, ie. the wind. We notice the absence of air when we swim underwater and when an unventilated room becomes hot and stuffy.

Like many other elements, air requires a particular sort of focus in order to accept its existence. As invisible as our imagination, it is when air moves that it is felt, drawing patterns in the sand, rearranging the geography around us to transform our world into a sphere in perpetual transformation.

The history of humanity is a long tale of transformation. From the Stone Age to nowadays, we have been continuously transforming our world and thus transforming ouselves. We transform ourselves everyday, we create ourselves from the moment we are born, trying to control our lives according to our different circumstances, our moods, the society we live in and of course the elements which make up our environment. The seasons and the climatic conditions influence our activities and our movements.

A dream : to be able to use our incredible powers of transformation.

My artistic necessity is particularly focused upon the question of our relationship with our transformations. I want to explore the influence of these transformations upon our everyday lives and therefore upon our imaginative world. I am especially interested  in the way our moods change with the weather.

This subject grabbed my attention when I came across a study led by the Ludwig-Maximilians University in Munich.

The study focused on the relationship between meteorological events and human behaviour. It recorded a 10% rise in suicides and accidents during episodes of foehn winds in Europe.

In observing our daily lives, it seems obvious that our moods differ depending on whether it is warm and sunny outside, or cold and wet. The wind in particular influences our mood, and there are numerous popular myths associating strong winds with diverse complaints, ranging from migraines to psychosis. Each wind carries its own story, each society has its own wind. Whether it’s the Sirroco, the Mistral, « le vent d’Autan », the Youga wind, or the Santa Ana, there are very few winds which escape the reputation of being devastatingly destructive.

Once again, what interests me is the predicament of a human being grappling with the elements. As with ice in « P.P.P. » (Position Parallèle au Plancher / Perillous Parallel Position), wanting to manipulate and dominate the air is a battle which we know we cannot win, because air is impalpable… but my curiosity is fuelled by the Utopian notion of man victorious over matter.

So I am exploring the limits of control and surrender, of erosion and of the impossibility of stopping the movement.

I want to be projected into the unknown, alone with the caress of air. I am matter which is transformed by the eroding properties of air, I am leading a Ubuesque battle, trying not to be tamed by the currents, seeking to come as close as possible to the edge …

Therefore, I invite you too to be projected into the unknown, into the two visions that are « Afternoon of a Foehn » and « VORTEX » …

(Afternoon of a foehn)

This is a piece of choreography for puppets and their puppeteer, a ventilation system and a few props ; plastic bags, a coat, a pair of scissors, a roll of sticky tape, a walking stick and an umbrella.

Accompanied by the notes of Claude Debussy’s three musical works :  « Afternoon of a Faune », « Nocturnes » and « Dialogue of the Wind and the Sea », a ballet mistress creates a piece of choreography performed by plastic dancers, propelled into currents of air. Without needing to touch them, or barely even brush against them, the freedom of their movement makes the puppets seem more and more human by the second, the air streaming through them like blood flow. Through the manipulation of the plastic bags, their evolution and their transformation, a relationship develops between progenitor and puppet. This is where the adventure starts. We witness fortuitous encounters dictated by thermal phenomena, an « étoile » ballet dancer is born before our very eyes, there’s a « pas de deux » here, a burst of fireworks there, and further down the track a monster may be lurking …

It was whilst working on a commissioned piece on the theme of « movement » for the Natural History Museum of Nantes in October 2008, that I had the idea of exploring the element air and its tremendous potential on our imaginative world. Wandering through the museum alone in the middle of the night, I spent hours and hours trying to work out what it was that troubled me in this space, surrounded by wild, inanimate mammals. In the end I realised that is was the absence of any air current which made things feel so strange. So I installed a series of silent ventilators in the evolution gallery. Listening to the sound of rustling fur I became aware that the gallery is actually a place which exhibits death. The museum suddenly became a graveyard into which I decided to reintroduce life in an unexpected form. A pink plastic bag, ballasted very slightly, began to circulate from frozen animal to frozen animal, like an odd, unexpected visitor ! This gave me the urge to create a piece of choreography for transfigured plastic bags.

This piece is for children (from 4 years up) and lasts 40 minutes.

In technical terms, eight silent ventilators are used to create a vortex, 5 meters in diameter. This basic vortex is not at all dangerous for children. A simple movement in the space provided creates a trail of air which modifies the direction of the vortex. By using objects such as umbrellas and long, heavy  coats, we can make depressions or « holes » of air, which allow us to control the trajectories of the puppets without having to touch them…

Featuring the manipulation of objects and elements – Play of Wind

With the support of the Théâtre de Thouars, a subsidised performance space in collaboration with the Cultural Services of Montreuil-Bellay, with « le Grand R » national theatre of La Roche-sur-Yon and with « Le Fanal », national theatre of Saint-Nazaire.

Warm thanks to Pierre OREFICE, to the teachers and pupils of Gaston Serpette School in Nantes (the nursery classes and the youngest class in the primary section 2008/2009), to Pierre WATELET and Mathilde CARTON from the Natural History Museum of Nantes and to Pascal LEROUX from Collectif la Valise in Nantes. 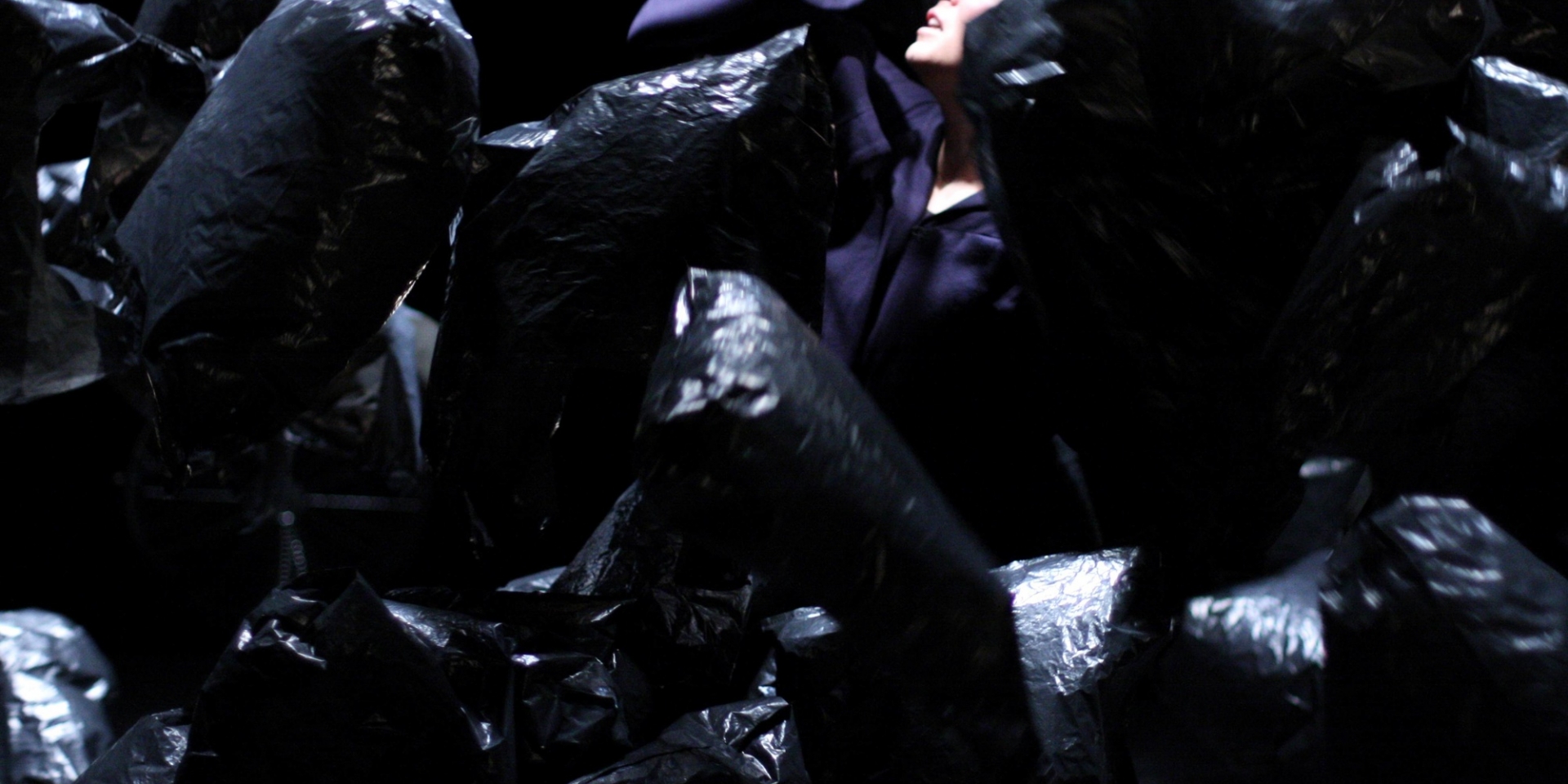